The HBS 2012-’13 application is out (wow that was fast – vacation over! thanks oh-so-patient and forgiving BSer who tipped us off that Dee’s post was up already). We’re celebrating — if you can call it that — with the release of a new SnarkStrategies Guide.

No, we didn’t turn around a new Harvard essay guide overnight (updated: though we did turn one around plenty fast!). This one’s been in the works for awhile. This one is for all of you who’ve been coming around to Snarkville for much longer than you planned.

This is the Reapplicant’s Guide. 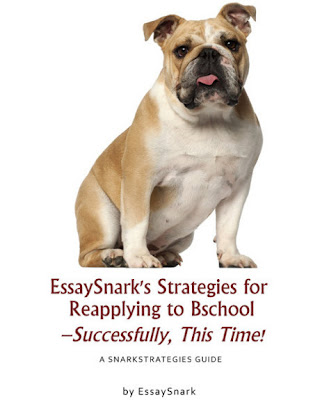 (Yes that’s a bulldog on the cover — there’s an even cuter one on the back — in honor of all you bulldogs out there who aren’t about to let a silly lil rejection get the best of you.)

Hopefully by the time you read this, it’ll be live in The EssaySnark Bookstore and on Amazon for the Kindle but if not yet, then soon.

If you’re a reapplicant, this new guide should help you out. However, it’s not the ‘Snark’s way to force you to buy something. If you’re facing the prospect of trying again in the application season that’s just been thrust upon us, here’s some thoughts to get you thinking about this here situation you have found yourself in.

We’ve said before that if you didn’t make it in, it was either because your profile wasn’t strong enough, or your pitch wasn’t compelling.

Now that you know that, what do you do?

If the problem was with your essays, then it’s one of two things:

In all cases, if you were rejected this season, you should be actively seeking out ways to improve your profile through contributions at work and/or in the community, creating success stories in your life for where you’ve had an impact and brought good things to other people.

Actually, if you’re just now considering your very first applications to bschool, then that should be your focus as well.

If you had good examples of achievement in your essays this past season, then the adcom might have been able to overlook some shoddy writing. (Unless you reused an essay and didn’t change the name of the school — if you exhibited that type of sloppiness, some schools will reject out of hand. Ditto if you had more than a handful of typos.) You don’t have to be a Hemingway to get into bschool; this is an MBA you’re going for, right?, not an MFA*. So that sort of distills it down to poor content.

Which means, you failed to impress the adcom.

Which takes us back up to the advice above: You should be spending time now in creating a plan for how you will improve yourself in the next few months. You need to have tangible evidence that you’re a stronger candidate today.

Where can you make an impact in your job, in the world around you?

Basically we just summarized the entirety of that 50-page book we wrote, here in one 650-word post.